FIFA has urged competition organisers to use “common sense” when considering whether to punish players for protesting against the death of George Floyd during matches. The German FA (DFB) says … Continue Reading George Floyd death: FIFA tells FAs to use ‘common sense’ over player protests

The Polish striker suffered a knee injury before coronavirus halted the German league, but he was back in action and scoring in victory on SundayRobert Lewandowski reached 40 goals for … Continue Reading Lewandowski reaches 40-goal mark for fifth straight season after injury return as Bayern Munich beat Union Berlin

Football game’s return in Germany was marked by empty seats off the pitch and a lack of intensity on it, but it offered a template for others to followFootball is … Continue Reading Social distancing, masked subs and Haaland scoring: Bundesliga offers view into football’s post-pandemic future 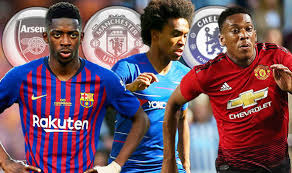 Chelsea have opened talks with Leicester over Ben Chilwell, 23, with the England left-back keen on a move to London.  Chelsea are also interested in French left-back Fode Ballo-Toure, 23, from Monaco as a cheaper alternative … Continue Reading Transfer gossips

Bundesliga cleared to restart season on May 15.

The top two tiers in Germany will return on May 15 as the government continues to ease lockdown conditionsGerman chancellor Angela Merkel has announced that Bundesliga football can return to … Continue Reading Bundesliga cleared to restart season on May 15.